It has been a while since I have posted on this blog. I have been busy sourcing antique and vintage fabrics and dyeing katazome textiles. I have also been working on a new website and blog. Please visit our new website for blog posts on antique Japanese textiles and my new indigo dye projects. We also have a shop where you can purchase fabrics and  an experiences page where you can learn about upcoming classes and textile tours.   Visit the new website at: www.nsomerstextiles.com 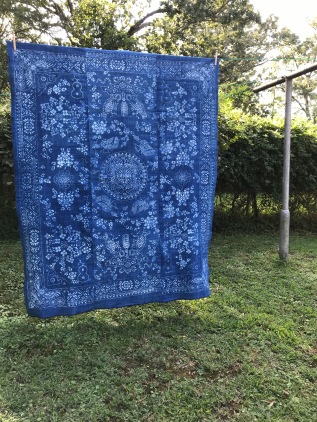 This past weekend I visited with my wonderful friend Cassie Dickson. Cassie lives in Western North Carolina and is an exceptional spinner and weaver. She focuses on the weaving of traditional overshot coverlets, but she also grows her own flax for spinning and weaving and raises silk worms each year. This batch of silk worms hatched late and as such Cassie had already collected cocoons and eggs from most of her silkworms. She offered to give me this box of 20 worms to take home. They have happily been eating mulberry leaves from the yard for the last several days 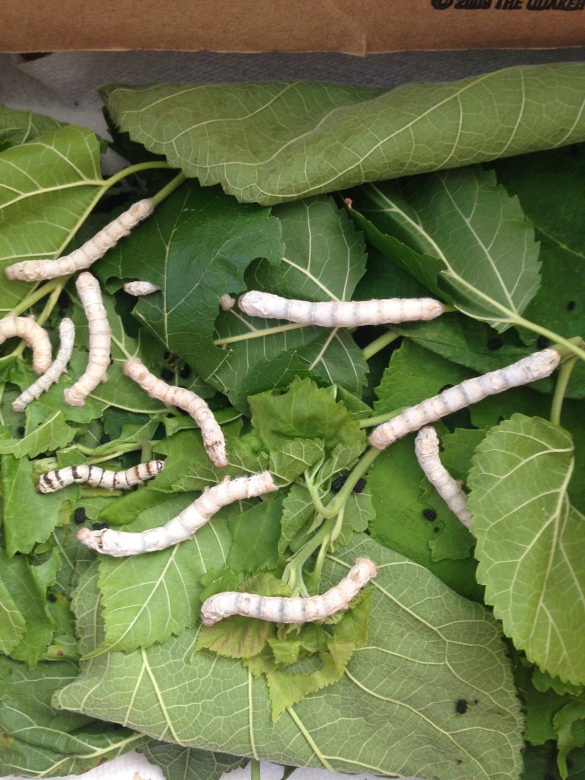 When this thread arrived from Japan there were small bits of newspaper from the 40’s or 50’s clinging to some of the threads. I assume they were packed away in a weavers workshop for many years. Everything about this thread makes me contemplate the extreme skill needed to produce such consistent and strong thread. The hemp was harvested, steamed, dried, boiled, the fibers were then separated and hand spliced. In the second photo you can see the joins where the spicing was done. After splicing a final twist was added using a spinning wheel. I have several hanks of this thread and I think I will use it for the warp of an upcoming project.

I recently found this beautiful 19th century indigo dyed fabric that was more than likely used as a furniture cover. These were traditionally made for a wedding and often display the brides family crest. The hand spun cotton thread lends texture to the fabric. The design was worked using a rice paste resist and a method known as tsutsugaki. The light blue of the family crest is known as kame nozoki, or peeking in the vat. The fabric was first dyed with a yellow dye and later over dyed with indigo to create the beautiful green color. In the close up photos you can see the yellow dye that seeped under the resist paste. The last photo shows one of the corners where the yellow dye is also visible. I would guess that the yellow was obtained from gardenia seed pods. 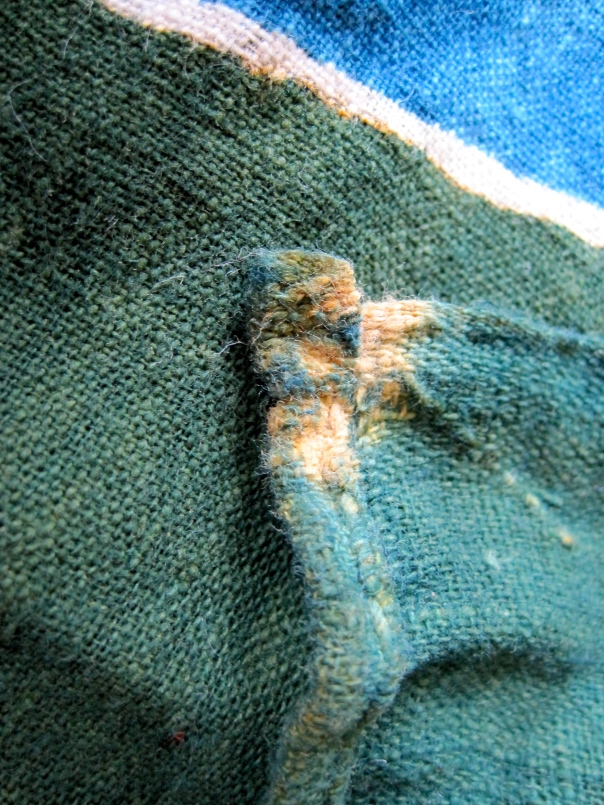 This small two panel furoshiki was probably part of a set of three or four and has been decorated with a family crest indicating it may be part of a traditional wedding dowry.  It dates to the late 19th century and is made of hand spun and hand woven cotton. The color is a worn grey which I think may have been obtained by using sumi ink as a dye. The small tsutsugaki pine tree design in the corner is wonderfully simple and sweet. 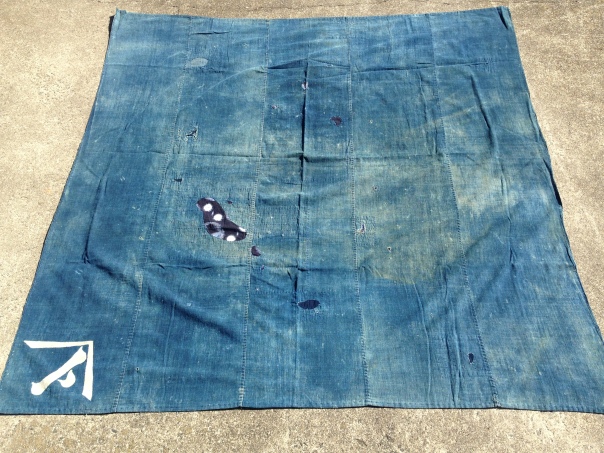 This large Indigo dyed furoshiki has been patched multiple times with smaller indigo dyed patches and several pieces of indigo kasuri fabric. The furoshiki was made from hand spun and woven cotton. The worn colors and textures make this an amazing piece of fabric history. 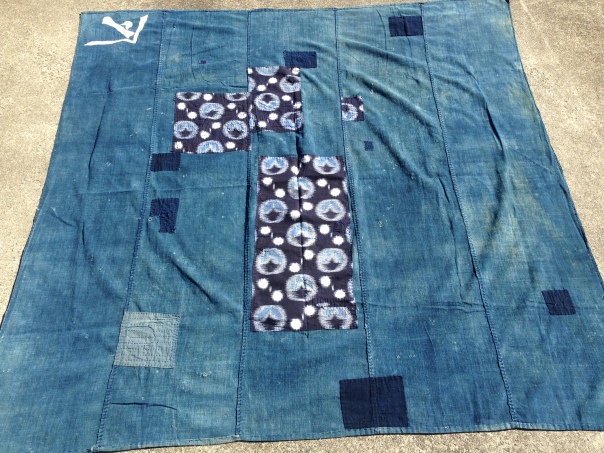 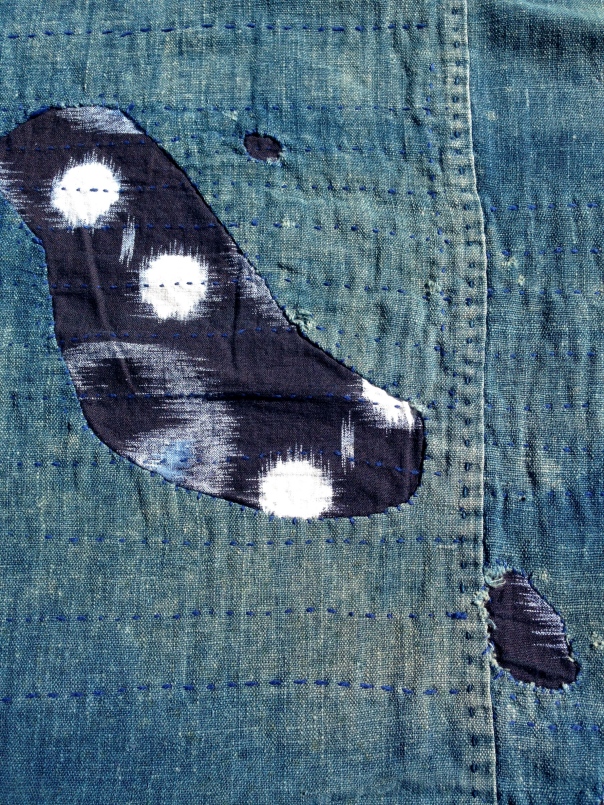 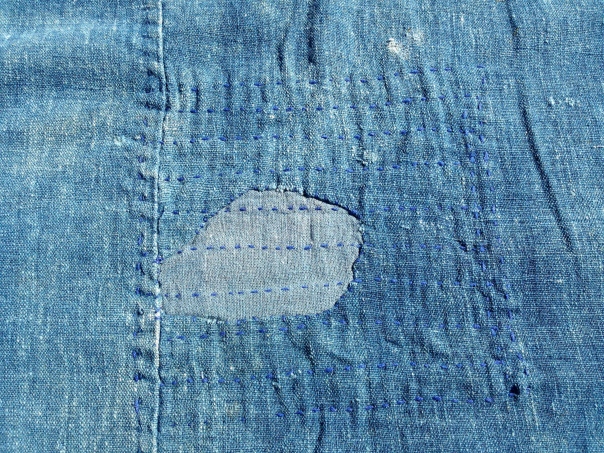 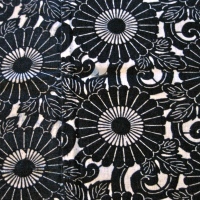 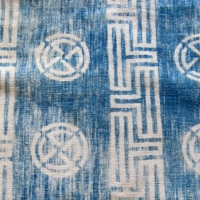 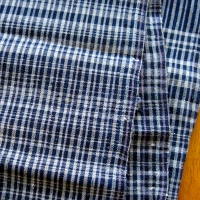 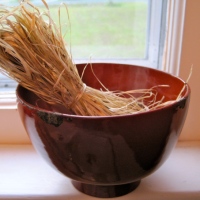 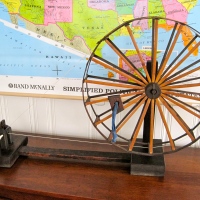